<![CDATA[I have been playing with story animation tools for a long time, learning from colleagues' blogs and links on Twitter.  Recent posts include Burcu Akyol’s  4-3-2-1 Action! Online Tools For Making Movies in the Language Classroom and Shelly Terrell’s presentation on Digital Storytelling which includes some excellent ideas. Here are a few additional ones, which you can use with technology as well as without technology.

“Animation is the rapid display of a sequence of images of 2-D or 3-D artwork or model positions in order to create an illusion of movement.” (from Wikipedia)

If ‘rapid’ is a pre-condition, then I guess some of my examples aren’t real animations, but mere illustrations but I have decided to use the term ‘animating’ in the sense of ‘breathing life into a narrative’ by creating a picture story board with Web 2.0 or conventional tools.

In a lesson which some of my trainees created some years ago, in the absence of Web 2.0 tools, they created a great storyboard poster with character figures they could move at appropriate moments during the story-telling. Teachers of younger learners are sure to have used techniques such as this,  or flannelboards or flannelgraphs (as some call them) and, of course, magnetboards! But even your own board or IWB can serve as a fantastic backdrop for moving figures!

Here is my trainees’  lovely animation; Red Riding Hood and the wolf are movable characters: 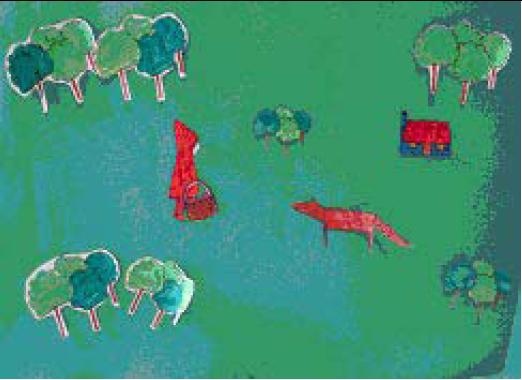 I have chosen to stay with the James Thurber version of Little Red Riding Hood. I am very partial to this version written in 1932;  the wolf gets it at the end of the story, because, the moral goes, “It is not so easy to fool little girls nowadays”…. It’s a great story to use with adults, because many of its elements are reminiscent of the original fairy tale, which most of them will know, but it comes with a twist, a sting in the tail and the humour of it may appeal to some learners.

This is a text I have used in seminars for all sorts of sessions, from Running Dictations to learning how to make flowcharts (and other information transfer diagrams) for narratives.

You can view some interesting techniques on my Materials and Downloads page, where you can find and download the lesson plan written by one of my trainees and the beautiful materials collaboratively prepared by her teaching practice group. You can find it as one of the files I have uploaded in a ‘Box”. It’s called “The little Girl and the Wolf”.

This version of the story is, of course, not suited to using with young pupils, but you can very easily make the original story with a young class if you think it’s a story you want to work with…

Here is an animation of the same story I made with Creaza Cartoonist, chosen because it had the characters, backgrounds and images needed to create this animated story and was very easy to create. There are many other tools available and I intend to compare them in a later post, but for the time being, this was the one which had the characters I needed readily available.
http://content.screencast.com/users/MarisaConstantinides/folders/Jing/media/4b6a00ca-5481-40df-9696-208ca4dcb457/jingswfplayer.swf

You can do one or more of the following:

The students can be asked to:

You can do one or more of the following

Narratives are very powerful tools as the activities they can generate do not limit themselves to just what happens in the story but they can very easily lend themselves to all sorts of activities which use the story as an inspiration or a springboard.

N.B. This post needs finishing and updating when my arm is back in synch. 🙂

For the time being this will have to do because I don’t see myself being able to write much before  mid November.

Please comment &/or add links to your own blog posts in which you have used story animation tools. I would really love to read them

The Educational Uses of Digital Storytelling page – University of Houston