Words from Context: of Logic & Connections

In his great taxonomy of language skills which appears in his well known book “Communicative Syllabus Design“, John Munby mentions “developing sensitivity to context clues”,  as one of the microskills of  reading. kapitzvirt

In this post, I would like to share an insight gleaned from an EST (English for Science & Techonology) series of books which was published a very long time ago and which I discovered in a second hand bookshop some years ago – and have treasured ever since. The particular reference is from “Discovering Discourse” , I believe, second in the series.

The series does not bear the names of any identifiable authors, so if you are one of them, please step forward and declare yourself, and gain my admiration! The series editor was Professor H.G.Widdowson, and, according to a friend who was then working for OUP, the publisher, the series sold about three and half copies! Or thereabouts.

Guessing vocabulary from context is neither novel nor unfamiliar and most good coursebooks will nowadays have an exercise or two which will encourage the students to do just that. In posts, related to vocabulary teaching and learning, I have mentioned the need for this type of exercise and some exercise types myself.

Some of the typical suggestions to help train the learner include noticing the shape of the word (internal morphological analysis), noticing and understanding the function of affixation, of collocations as well as studying the linguistic and non linguistic environment around particular lexical items, what most people would call ‘guessing from context clues’

The book containes a fantastic idea which I haven’t seen anywhere else, and which I have used for quite a while now with teachers and learners. It’s based on the notion of understanting the logical connections between different parts of the text and exploring them in order to deduce the meaning of new and unfamiliar lexical items or phrases.

In the example below, the learners are given an example of how to make use of the logical relationships existing in texts, within and across paragraphs, which make it possible to understand lexical meaning, simply by working out the way ideas or facts related to each other. Here is the training example from the book itself. 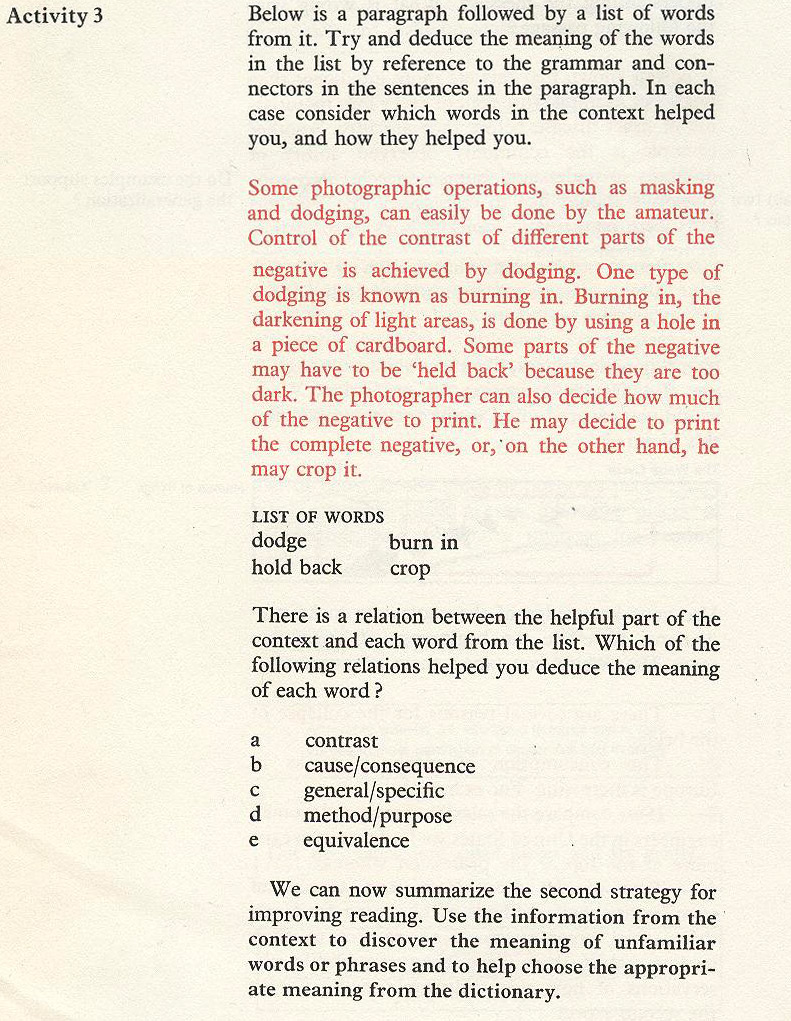 Example of how logical relationships may help guess meaning from context

The five logical relationships mentioned are not fully analyzed in the manual; however it is not difficult to guess how they work.

What the authors are saying, at least that is my own interpretation, is that if you have unknown vocabulary in one part of the logical connection to another idea, then, it is not impossible to deduce the meaning either by contrast, analogy, etc.

In my own training of learners, I have both used this with classes high and low and have encouraged my trainees to do so as well; in fact, I once saw a great lesson taught by a Diploma trainee, in which he got an intermediate class to read a medical text and got them really impressed by the fact that they could guess all the difficult medical terminology by applying themselves to figuring out how ideas are connected within and across paragraphs.

With elementary students, it is possible to train them up by giving them simple examples and having them match up the relationship to the item guessed. E.g.

The relationships themselves can be translated as they may be too difficult to also have to juggle with while you are doing this training with your learners.

With higher levels, especially if you have also taught them some or all of the logical connectors, you can get them to match them up with the logical relationships: 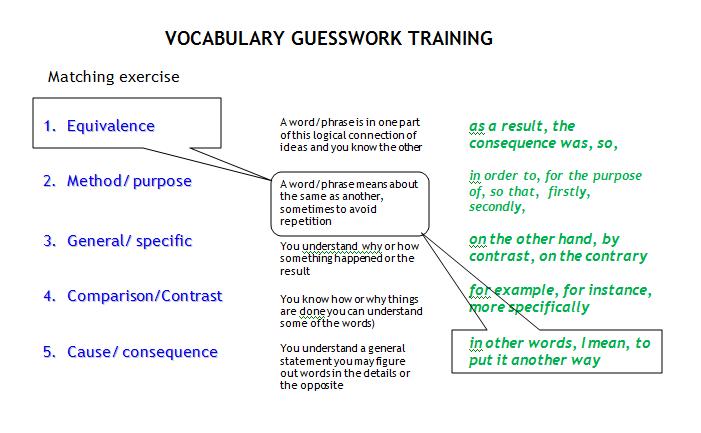 There are various other ways in which you can use these categories, including creating a standard worksheet that your learners can use with any text in which they have a high number of unknown lexical items.

When to use this technique

Use this technique if your learners have the cognitive abilities required to identify logical connections – don’t use it with young learners because you will simply be disappointed!

Use the technique after your learners have seen a text a couple of times and it is time for some ‘bottom-up’ processing; don’t use it first thing into a text.

Finally, don’t worry if you notice that your learners have trouble articulating precisely which relationships helped them in each case. This is something I noticed myself with higher level students, even with teachers I was training in the technique. It will take some time, but the process seems to help them make better guesses, even if they get the logical relationship wrong!

If I find the lesson plan and assignment – I never throw anything away – I may be able to upload them after I have checked with my trainee.

If you decide to use this technique with any of your classes, I would appreciate your feedback, comments and any comments made by your students, if you choose to ask them to evaluate it.