This is not the image a heartbeat. It’s the burst of energy of hundreds of tweets which are sent by the many ELT professionals participating in an online discussion called #ELTchat every Wednesday at two different times, at 12:00 p.m. GTM and  at 21:00 p.m. GMT.

Every Wednesday at 12:00 p.m. GMT and 21:00 p.m. GMT, a great number of ELT teachers from all over the world log into their Twitter account and for one hour they hold an online discussion (chat) on a topic they have selected.

The conversations can be followed by following the #ELTchat hashtag (please read the last section if not sure what a hashtag is); so anyone who posts a comment, a link, a question, must put #ELTchat somewhere in their message (status update or tweet). This way everyone who follows this hashtag can see their tweets.

A good number of topics have already been discussed, from learner autonomy to using Web 2.0 tools, and the chat seems is very popular and attracts a great number of ELT teachers every week.

Anyone can join and comment or just follow the comments until they get used to the flow of the conversation and feel ready to add their own comments, responses to other colleagues or suggestions and links. 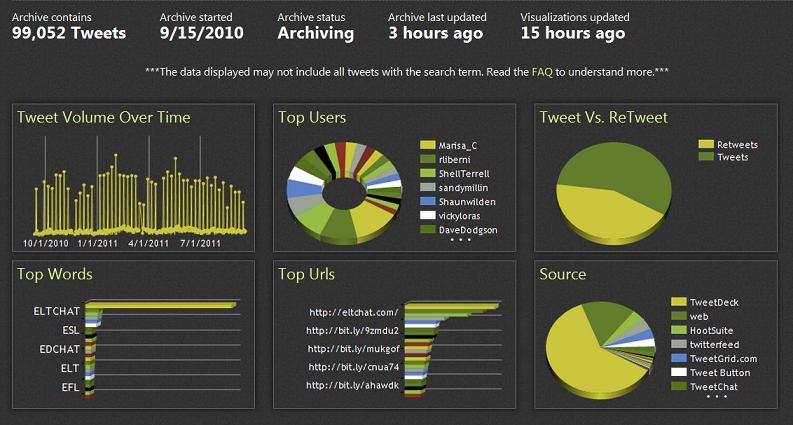 Number of tweets recorded on September 21, 2011

#ELTchat: a ready made PLN for ELT professionals

In the summer of 2010,  Shelly Terrell, Jason Renshaw, and, later, Berni Wall, Andy Chaplin and myself started discussing creating an #ELTchat, our vision was to create a communication channel which would allow teachers to:

All five original instigators were in full agreement about wanting to

A decision was made, via skype, twitter and e-mail and #ELTchat kicked off on the 15th of September 2010.  Meanwhile,@olafelch set up the blog which would house all the transcripts, reviews and much more, such as reviews and podcasts!

They can all be found on the  #ELTchat blog which you should bookmark now! 🙂

Here is an overview of the volume of tweets at the time of writing this post and the engagement of various fellow #ELTchatters!  99,052  tweets! Amazing, isn’t it, in such a short time!

Obviously, as moderators, we tend to show higher numbers, but the #ELTchat timeline is alive all week long, not only on Wednesdays.  By now, it has come to be included as one of the standard hashtags added to updates connected to English Language Teaching on Twitter!

Of the four oroginal moderators  working on #ELTchat every Wednesday, two had to stop moderating,  either for health reasons (@olafelch)  or because their work circumstances changed drastically (@englishraven) but we were very very fortunate to have great ELT colleagues step in and take their places

But the moderators are not the only people actively involved in #ELTchats!

More recently, we have had started inviting guest moderators, experienced teachers,  teacher trainers and authors who can enrich our #ELTchat conversations and our first two guest moderators were:

Since all moderators are also working people, we ourselves  cannot be online to moderate every single time.

On those occasions, whenever we have called upon colleagues online to help at the time, we have had fantastic responses and a great show of good moderation skills by #ELTchatters such as @esolcourses (Sue Lyon Jones), @bcnpaul1 ( Paul Braddock) and @ceciliaoelho (Cecilia Coelho).

It’s been great working with so many keen and talented colleagues!

How are #ELTchat topics chosen?

Every Saturday, one of the moderators  will ask teachers who follow #ELTchat to propose some topics for the next chats through a blog post is (here is an example) and the link is posted on Twitter and re-tweeted by all the moderators several times throughout Sunday.

#ELTchat followers – or anyone else, in fact – can go to that post and suggest topics in the comments under the blog post. Sometimes good suggestions for topics are suggested on Twitter itself!

Then on Sunday evening, the moderators look at the topics suggested, review them in case they have been covered before, sometimes edit and reword them slightly to make them more clearly focused and create an online poll such as this one which was used for the topics of our previous chat. 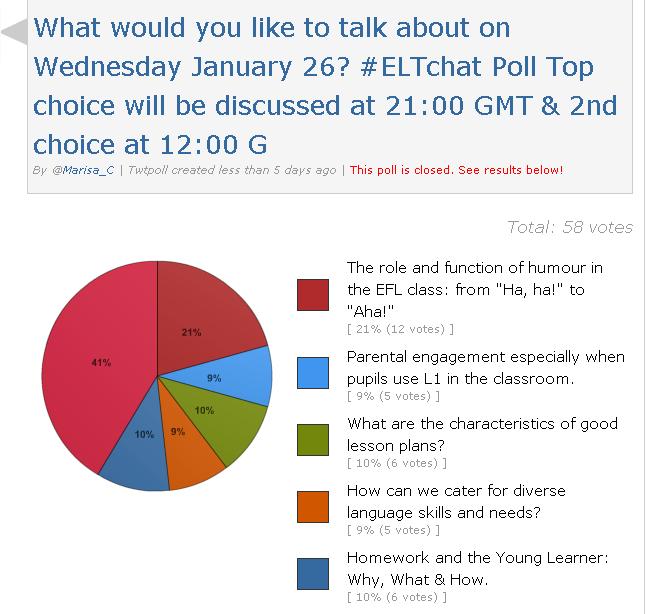 One hour before the 12:00 p.m.GMT chat begins, the poll closes automatically and the first or second topic (we alternate each week) is discussed during the one hour of the chat.

So how can you get involved too?

If you are not a Twitter user you need to know these basic facts about it:

If you are new to Twitter, the concept of a hashtag may be alien to you. Don’t worry!

We’ve all been there as newbies on Twitter and it’s perfectly normal.

The best thing you can do if you are new to Twitter or even if you haven’t got a Twitter account, is to watch this great Teacher Training Video, An Introduction to Using Twitter , created by Russell Stannard,

And even if you are not a Twitter user, you can still view the conversation while it’s taking place on Twitter by searching for #ELTchat postings either on TweetGrid , What the Hashtag or on Tweetchat

After each chat, the transcript is posted on the #ELTchat blog and more recently, we have started asking fellow Twitterers for summaries and, would you know, we have had an enthusiastic response!

One or more of the chat participants, write up a summary of the main points and ideas that came up duing the chat and post them on their blog, or if they don’t have a blog, we post directly on the #ELTchat blog.

Here are some of thes summaries with name of contributor,  Twitter handle, and their blog link so you can follow them on Twitter and read their blogs.

The #ELTchat blog  is fast becoming a wonderful and rich resource for ELT  teachers whether they join the chat or not. We were all very pleased when, as early as October 2010, #ELTchat was named as “Site of the Month” on http://www.tefl.net/ !

#ELTchat does not in fact belong to anyone. It was a concept that popped into different minds and the time was auspicious to start it, but it is not owned by the moderators – it is owned by everyone who participates and is engaged in the scheduled conversations every Wednesday!

We hope this will keep going as a collaborative project and effort which enriches its followers as well as its creators (!) with new ideas, many of which are simply born by the stimulating interaction and buzz which is created during the chat itself!

Oh! The tweets do come down fast and furious and fingers on keys catch fire during the one hour dedicated to these online discussions!

But it’s been a great trip so far and I have loved it just as much as I have loved getting teachers who were reluctant about even getting a Twitter account typing furiously every Wednesday and leaving each chat with expressions which show their enthusiasm, the great injection of energy, the inspiration it brings into their teaching and the great sense of being connected with colleagues on the same wavelength!

I rest my case.

If you have not joined by next week and are on line, you will be the one to miss out on a great opportunity. And life is too short to miss great stuff like #ELTchat! 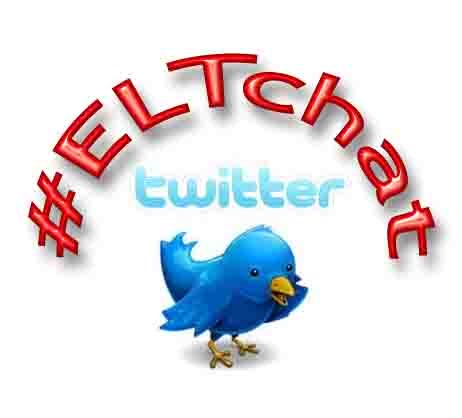 A ready-made PLN for ELT professionals 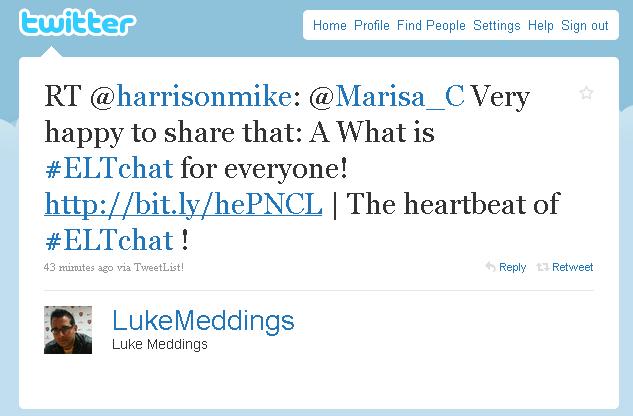 What is a hashtag? A quick explanation before you watch Russell’s video

A hashtag is the symbol # before any word or abbreviation, which allows you to follow anyone in the world who puts the same hashtagged word or hashtagged abbreviation in their tweets.

Hashtagged comments on Twitter– called a backchannel – are very common during conferences/ talks/  presentations & workshops during which the audience as well as interested people who have not been able to attend, are able to post updates, comments, hold conversations while the even is on, and often continue the discussion and commenting on Twitter long after an event has finished.

Hashtagged chats or conversations are not new. Already a great number of different groups of educators hold regular discussions on topics of their choice on Twitter. Jerry Blumengarten, known to Twitter users as @cybraryman has compiled an excellent list of all the education focused chats with details of days, times and hashtags used here in his great internet cybrary! No wonder many teachers call Twitter their ‘global staffroom’ because they can share and exchange ideas 24/7 with like-minded educators from around the globe. 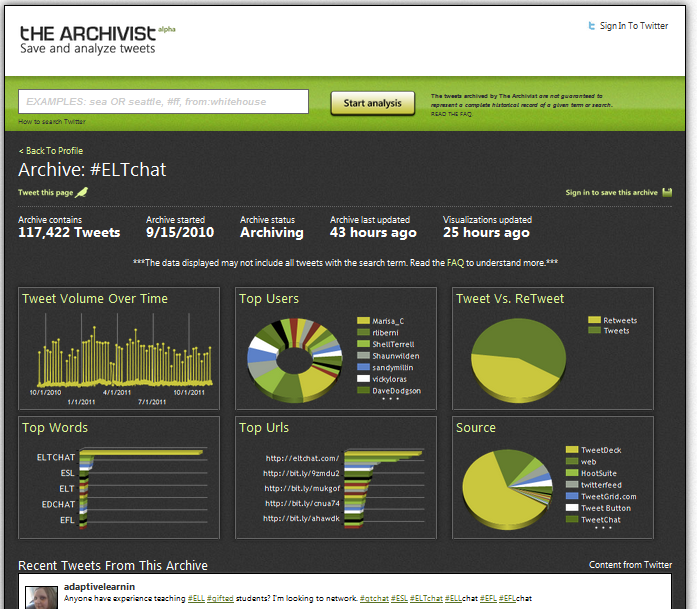