Watching Young Learners at Work: From Practice to Principle

This post is based on three activities on video with a young class in their first year of English videotaped as part of a training project for a course on teaching young learners. 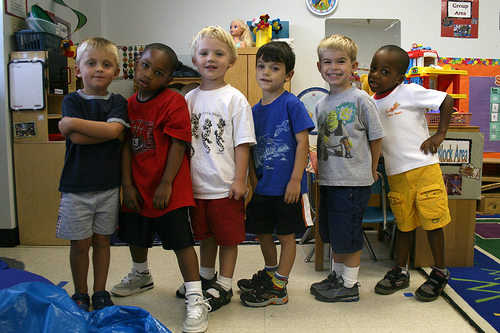 Some information about the young class

At the point of  being video-taped, this class of Greek children attending classes in a small language school in Athens, had had about 40 hours of English in total, mostly concentrating on oral work. The children were at the initial stages of being introduced to reading and writing . Most of them were  8 or 9 years old but there were also one or two 7-year-olds in the class as well. I taught the class myself, so  I am “the teacher” mentioned in the activity descriptions. Although I was not the class teacher, I had already taught the pupils at least four or five times prior to having their lessons videotaped. We had also videotaped them on two previous occasions to get them used to the presence of the camera. In this lesson, they were more or less used to its presence and, for the most part, ignored it.

N.B. The school had obtained permission from the parents to have the children video-taped for training purposes and on the day of the filming which was on an extra day, all the parents were aware of and in agreement with this project.

This activity involved familiar language which the teacher intended to revise, i.e., various items of clothing presented in previous lessons, and was organized in three stages:

Compliments, or as I put it to the children, ‘saying something nice to each other’, is a simple way to do a quick lead in and to get them to start understanding the importance of making other people feel good – a basic ingredient in polite communication in English. The other reason for including such positive feeling activities is that, of course, young children can sound, or even be, cruel. It’s a good idea to show them how nice it is to be rewarded and it encourages better relationships and friendships.

Every time I watch this, I cannot help but notice how the children’s level of comprehension was much higher than their ability to produce language. Another interesting comment has to do with the difficulty the children had with the last line of the chant. The structural complexity of the last line is to blame, of course, and the fact that possibly the different rhythmical pattern may have confused the class.

This was clearly a bad line and a mistake on my part when writing the chant;  the children had enough to do what with memorising the lines, the animals, the prepositions…. having to deal with this suprising complexity was a little bit too much for most of them. Comment: Despite the point just made, I am always surprised when I watch this video by the fact that some children were in fact able to reproduce this uinecessarily complex line. Some learners do learn despite their teachers!!!

Principles drawn from this classroom event

This game is an adaptation of the well known “Simon says” listening game, in which the children are not supposed to perform a command if the teacher does not include the word “please” in it because it’s not “nice”.

When I sometimes show this short clip to teachers, they express concern at my lack of correction. At some point in their production, the children forget all about using the imperative with ‘please’ and some start using the -ing form instead, as in “Standing over there, please!”

My reasoning for not correcting is not an uncommon one; children should be allowed the opportunity to experiment with language and some interference of old with new forms is natural and expected. At the time of teaching this lesson, they were also being introduced to the ‘here and now’  present progressive so some conflict between old and new forms is really not so difficult to understand.

There was no delayed correction either, something which would be expected with adults. With this very young class I chose not to do it as this was a game played very frequently and my expectation was that it would eventually get sorted out anyway.

On occasion, I used some L1, but only for instructions and only in the middle of saying it twice in L2 – sometimes called the ‘sandwich method’ : say it once in L2, then quickly in L1 and again in L2, gradually removing the L1 from the instructions.

Principles drawn from this activity

All three activities were ‘micro-planned’ by using this simple outline:

I hope you enjoyed reading this post based on teaching a young class.  One of the comments I would like to make is that even today when I show this video to trainee teachers or colleagues, they have a hard time believing that these children had only had only a total of 40  hours of English so far. This says a lot about their class teacher, Mrs. Effie Kallimani, an absolutely superb teacher who was unfortunately camera-shy and refused to be filmed for this project.

In the following year, many of these children were taken by their parents to another school, because this teacher was not using a grammar book like that school next door…. A rather sad ending, isn’t it… Teaching young learners is a very serious business but I am afraid that ‘serious’ is confused with ‘no fun and games in class’ in some contexts.

Do please leave your comments on this lesson or add your thoughts and ideas about teaching young learners.

Related Posts on this Blog