N.B. A shorter version of this post originally appeared in the Garnet Education Blog

The story behind #ELTchat

Back in 2010, a bunch of us TEFL people thought that we should start a Twitter hashtag for teachers in English Language Teaching.  Twitter hashtags (#) had already been around for a couple of years, mainly for twitter folk to be able to access information on disasters and acts of public interest – a fire, I believe,  was one of the first instances of using them.

The inspiration for #ELTchat came from another, general education, hashtag, #Edchat, which had been going for a few months thanks to Shelly Sanchez Terrel  and Tom Whitby.

Shelly, Bernie Wall, Jason Renshaw, and myself, Marisa Constantinides, were in the founding, so to speak, team. We set up a wiki to house the transcripts of the chat, a blog for the summaries and a Facebook group for our friends on Facebook. All these were lessons we learnt from #Edchat. 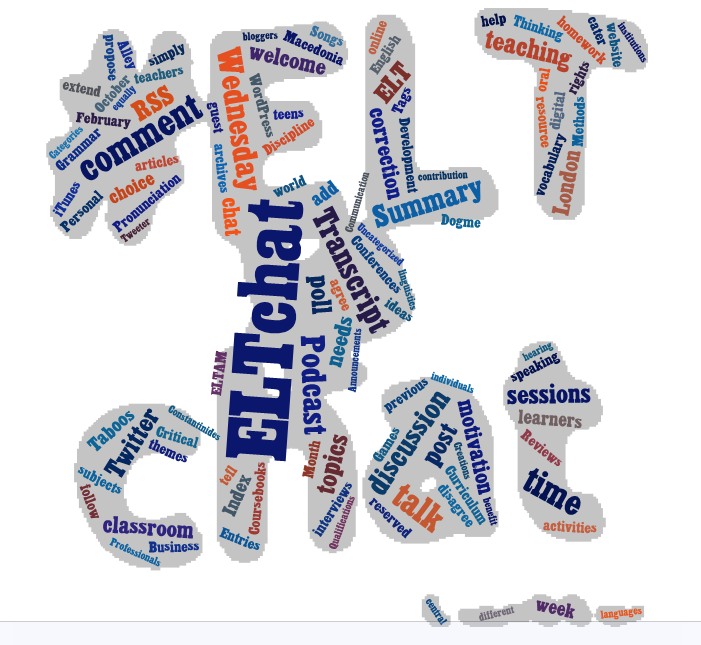 Soon, it became obvious that #ELTchat was becoming a hotspot of ELT connections and idea sharing. Numerous familiar people in ELT such as Luke Meddings, Jim Scrivener, Jeremy Harmer,  Chia Suong, Graham Stanley, Antonia Clare, Carol Read, Ken Wilson, Marjorie Rosenberd and many more,  have either served as guest moderators or have participated in our chats, set up polls, written blog posts, posted and shared transcripts.

The first year of #ELTchat was very intense and at the IATEFL of 2011 in Harrogate dozens of the people who populated our chats every Wednesday, met for the first time in what became known ‘as a ‘tweet-up’. Jeremy Harmer described it as a ‘love fest’ with people falling into each other’s arms like old friends. It’s a truly fond memory for many of us, one that is often repeated at conferences between people who have been talking about ELT online and feel like meeting an old friend in a fellow #ELTchatter!

That was the time when the term PLN (Personal Learning Network) was beginning to gain currency and we, the people of #ELTchat, boldly, and perhaps somewhat innocently, claimed that we offered our colleagues a ‘ready made PLN’ !!!

#ELTchat went from strength to strength and because of it, many of us got to know each other, went to conferences together and there were several great conferences, some in Istanbul, organized by the amazing Burcu Akyol (who has fled Turkey and moved to Canada). In 2012,  we invited Barbara Hoskins Sakamoto and Shaun Wilden to join the moderating team – these are just a few of the people involved in moderating and supporting the chat.

Our current team of moderators

What people say about #ELTchat

Hash-tagged conversations are such a genius invention because in such a simple way, people gain access to conversation or they can disseminate ideas relevant to a hashtag instantly and without needing tech knowledge.

#ELTchat was a new phenomenon in ELT which later inspired other chat hashtags such as #BrazELTchat and #AusELT to mention two of my favorites, and it did bring teachers who were pretty much on their own together; it gave them a forum to share ideas, to ask questions, to write blog posts and share them and find out about other people’s blogs. It’s no wonder that people talked about it and have even written dissertations and articles about it!!!

Here is what Marjorie Rosenberg wrote – at that time she was the President of IATEFL International and a very keen and frequent participant in all #ELTchats.

A reminder re: how influential & important #ELTchat has been & still is – IATEFL President @MarjorieRosenbe credits it w/ creating her PLN pic.twitter.com/syu2XFbLXL

The photo shows a screenshot from an animation of an interview by Tara Benwell for tefl.net. Here you can listen to the interview animated via Xtranormal and posted on tefl.net which had also awarded us a blog of the month early on!

[youtube https://www.youtube.com/watch?v=4vw_UbSLQhA%5D
This video was made with Xtranormal (now Nawmal) and uploaded in 2011.

@aClilToClimb #ELTchat is brainstorming in a global scale with a dash of fun 🙂
@SimonGreenall #ELTchat 1 informs me, 2 makes me think, 3 reassures me I’m not out of touch.
@sandymillin #ELTchat is ideas, new friends, inspiration, an adrenalin rush, motivation, new things to think about, a way to share 🙂
@mkofab #eltchat is learning, sharing, reflecting, a great way to build a PLN, sth to look forward to on Wednesdays and FUN!
@janetbianchini #ELTchat is stimulating, worthwhile, fab CPD, engrossing, fun, fast and furious, friendly, enlightening & essential Wednesday fix!
@DinaDobrou #ELTchat is a powerful hub of passionate educators and head-spinning ideas.

Ania Rolinska’s Dissertation on  Virtual Ethnographyin which she looked at how #ELTchat works and the benefits to the participants can be shown on her blogged presentation of her work as well as a wonderful prezi which can be seen here.  A prezi is a zooming presentation about the chat but was unable to share it here in this post.

ELTons Awards Finalist in 2012 and presenting at IATEFL

In 2012 we presented #ELTchat in a symposium organized at IATEFL Glasgow where we had moderators and #ELTchat participant Susan Hartle co-present with us – in the following year, Shaun Wilden and the writer of these lines presented a paper on Autonomous Teacher Development at IATEFL, a talk which was also presented online later that year.

There are more recordings of this talk and more recently an article with the same topic published by both of us in Modern English Teacher where we have shared our thoughts about teacher autonomy in their professional development.

By the end of 2012, we managed to get #ELTchat into the finalists list for Innovation in Teaching Resources but, oh well, a book got the award !!!!

We put on a brave face and smiled and congratulated the winners but,in the words of another finalist the same year, we were the only true innovation in the shortlist – that felt very good!! Still it wasn’t a bad thing to get into the finalist listings!! Here is a blog post of that time

So, what happens in an #ELTchat and how you can participate!

What happens is that every Wednesday at 19.00 UK time, some of us log into twitter , type up the #ELTchat hashtag in the search box, save the search and, voila, all our friends are there and we start discussing whatever topic we have selected in the days before the chat or that the moderators have chosen!

The tweets may come fast and furious and often colleagues just follow in the beginning before they take the courage to start contributing!  After the one hour, people can still add comments and ideas in the slowburn part of the chat.

What people benefit from #ELTchat has been said by many people – Sandy Millin, a frequent follower and mainstay of #ELTchat who helps us maintain the summary page on the #ELTchat blog said it all on #ELTchat’s 5thbirthday

I invite you to join us every Wednesday evening or other time of the day as the case may be and join our conversation about everything ELT under the sun.

We have already created a formidable bank of teacher co-created content some of which we hope to be able to publish in e-book format at some point and this bank of summaries is regularly recommended by teacher trainers many of who have been or are still #ELTchat followers and contributors.

Being a connected educator can help you in many ways which are unpredictable and wonderful and we hope you, too, will take advantage of this great opportunity.

Marisa Constantinides is a teacher, teacher educator, conference presenter and ELT author. She is the Director of CELT Athens, a CELTA & DELTA centre in Athens offering face-to-face and online courses.  She is one of the moderators of #ELTchat and maintains the following blogs: TEFL Matters, The Cambridge CELTA blog, The Cambridge DELTA course blog, and the ELTchat Blog.